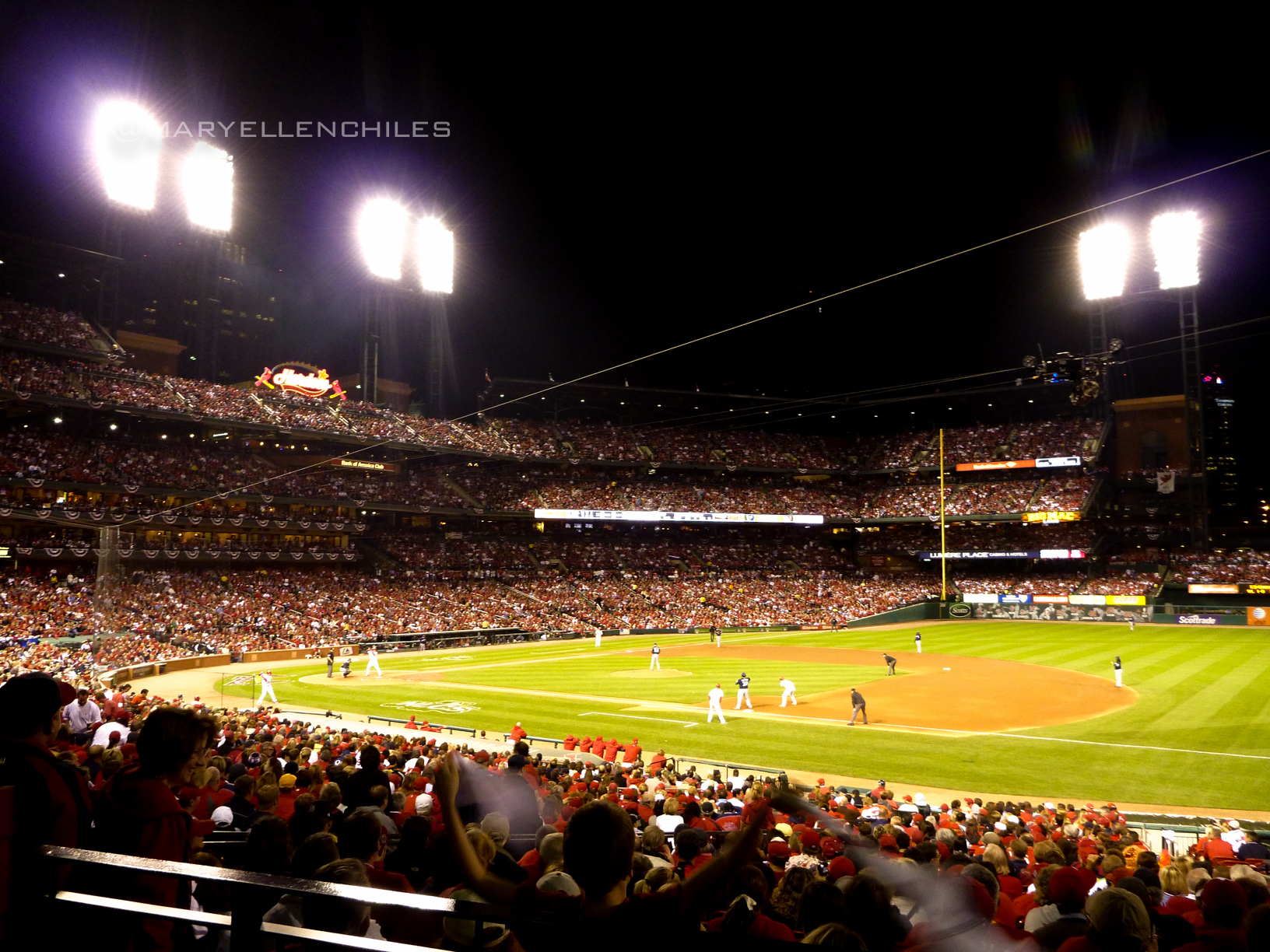 Behold. First published in similar form on a previous blog of mine in late October 2011. I bought a standing room only ticket for the World Series in St. Louis, arriving at noon for the 7 pm start. It was rained out. The next day, I arrived at noon again.

This series featured the St. Louis Cardinals and Texas Rangers. Was it the greatest postseason game ever? Five errors say no. Memory says it was good enough for me.

The Rangers started hitting in the first.

I held my breath and hoped I wouldn’t turn blue.

(And kindly suggested Jaime Garcia read The Mental ABCs of Pitching this off-season.)

Blessedly, he got out of the inning only down a run.

And the Cards’ Skip Schumaker singled, and Lance Berkman hit it out!

I high-fived strangers wearing squirrels on their heads.

Texas tied it at 2, and Adrian Beltre hit with a runner on.

“That’s my da-ddy!” a child chanted as the hitter waited.

I felt the season dissolve.

The Rangers’ Colby Lewis tried to bunt with a runner on. He tried a second time.

But he stayed in.

The women nearby agreed.

But the Rangers were soon up 1.

I stood against the wall, running to the railing before every pitch to peer around fans standing in front of me.

And their pitcher scored.

My phone lit up with 4-letter texts.

The crowd above me roared:

How did I wind up so close to Rangers relatives?

They can’t be real people!

The Birds’ Allen Craig knocked one out.

“Yadi!” we screamed as Molina hit with the bases loaded in the 8th.

“The stars at night! Are big and bright! Deep in the heart of Texas!” Ranger fans shouted and sang.

I wanted to punch them all at once.

But I also started counting outs.

A man wearing a Josh Hamilton jersey pumped his fist, and a 20-something wearing Ranger blue cheered.

Batter Ryan Theriot needed to reach for Albert Pujols to tie it with a home run.

But he struck out instead.

“If he hits a grounder he better run it out!” I told another fan near me.

Pujols hit a grounder to the wall and stopped running at second base.

Closer Neftali Feliz was wild, and I yelled as he fell behind Berkman.

Two on base! Allen Craig! Our hero!

“Torty! Do it for Torty!” we shrieked.

“That was outside!” I yelled when the count reached 2-1.

He ripped a ball foul.

No more batters to look forward to.

Only the one standing at home:

Texas fans hollered and held up phones and cameras.

The ball sailed into the air and dropped near outfielder Cruz as he ran to the wall. He reached.

I stared at the scoreboard, waiting for “2” to show up.

I stared at Freese.

He stood at third.

I stared at the scoreboard again.

But Cruz caught it this time.

Molina stopped running and slammed his helmet into the grass.

I jumped when the Rangers’ Ian Kinsler flew out.

Elvis Andrus ripped a single up the middle.

I looked around the stadium to forget the runner at 1st.

Hamilton launched a ball into the seats.

I grabbed the back of my head.

Texas fans grabbed the air above them.

I glanced at the lineup for the bottom of the 10th.

Beltre couldn’t reach a foul ball, keeping the batter alive, and Descalso ripped a single on the next pitch.

He agreed. Kyle Lohse hit for Edwin Jackson and bunted, and nearly beat the throw to first.

(But I don’t like runners at first these days.)

Theriot grounded out to make it 9-8.

“I wouldn’t pitch to Albert either,” I told a fan next to me.

(Though he’s been reaching for low and away pitches since the end of September.)

Berkman rocked a mullet, and a single to center, scoring Jay.

I watched a Texas fan choke back tears.

The Cards left two on to end the inning.

The Rangers didn’t score in the 11th.

I just hoped David Freese would nurse a walk to start the inning.

But the ball kept flying until it landed in the grass between the bleachers.

And Freese jogged around those bases instead.

I threw my arms around the ushers and fans.

I don’t even know what.

A few minutes later, I hopped down the steps, and I paced in front of empty seats as I called my brother in Oregon.

He said the announcers called it the most exciting World Series game ever.

I said I could never attend a better baseball game.

(Besides the 5 errors, of course.)

If St. Louis would’ve won the World Series tonight, I would’ve passed out.

Instead, I walked around in a daze, taking pictures of any fans who asked.

“Get the scoreboard in the background!” they said.

I looked around the outfield grass, to the groundskeepers combing the infield, and the MLB Network crew near the Cardinals’ dugout.

I wish I had words, but all I heard were Jack Buck’s rattling in my ears.

“I don’t believe what I just saw.”